Professional crypto market intelligence for everyone. 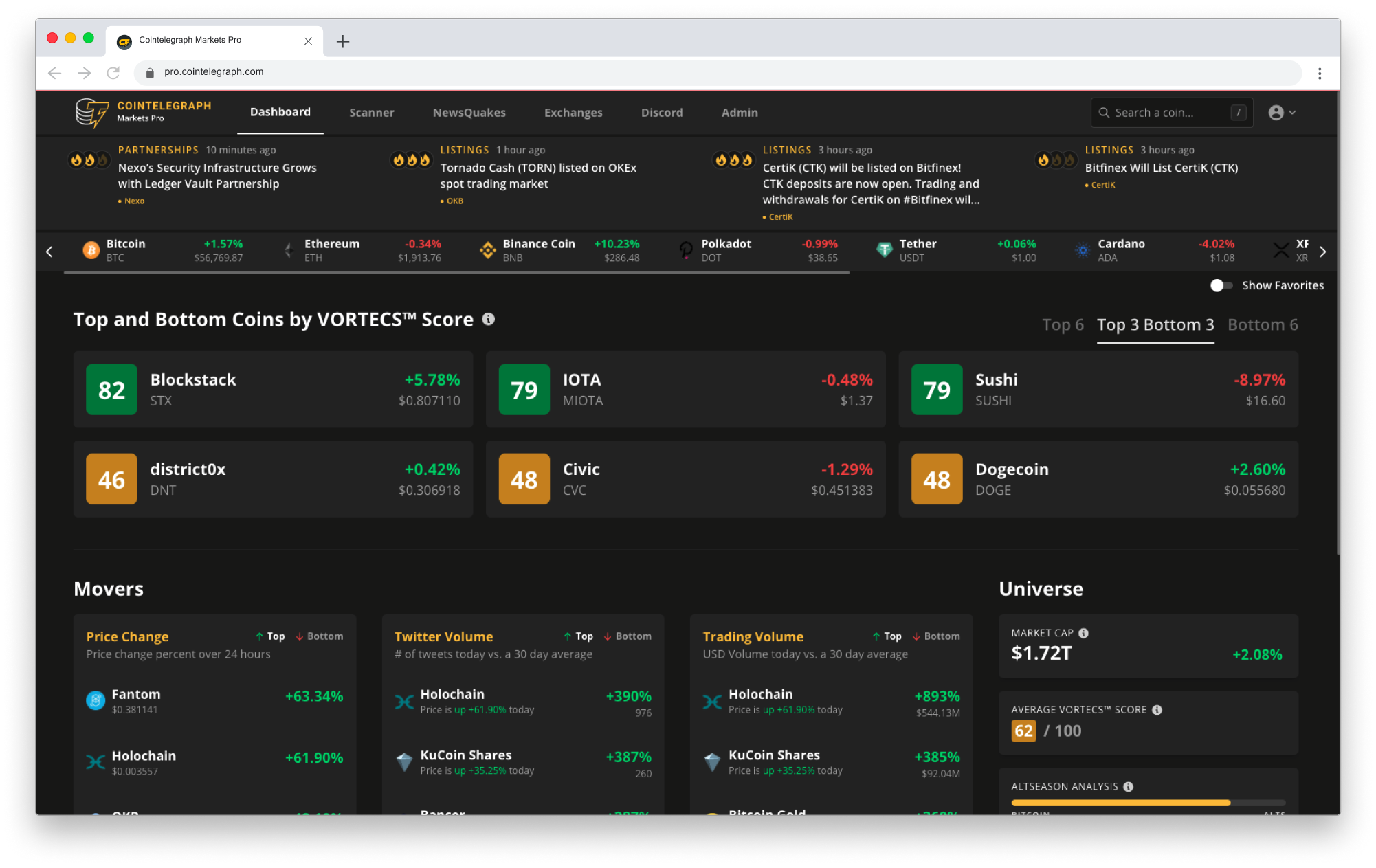 Ready to step up your game?

We all saw what happened recently.

Reddit users rose up against the hedge funds that were shorting GameStop... and the financial revolution became front page news again.

But there was a difference this time.

Redditors didn’t just focus on the unfairness of wealth inequality... They focused on INFORMATION INEQUALITY.

And so they shared their information — with each other.

And for once, the bankers were on their back feet... because real people had knowledge that even the hedge funds didn’t have.

And we all know knowledge is power.

We’ve witnessed a global surge in interest in cryptocurrencies, as well as a realization that the information asymmetries inherent in existing financial markets tend to be stacked against the average investor. We built Markets Pro to help level that playing field in the crypto industry. 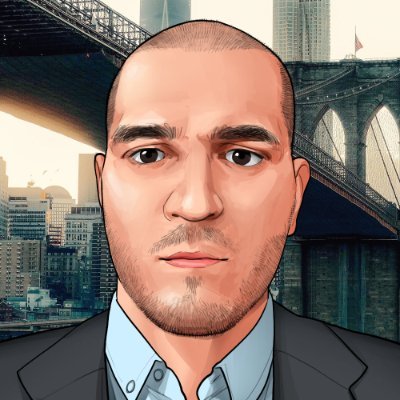 Here at Cointelegraph, it’s our mission to bring knowledge and power to real people. We do it with the news every day.

And now we’re bringing bleeding-edge market intelligence to the crypto enthusiast too.

You see, humans are funny creatures. We forget the repeating patterns of history so easily, yet we hold on to the memory of outliers fiercely.

Remember that time you arrived at the airport in plenty of time, enjoyed a cup of coffee and absolutely nothing out of the ordinary happened? Probably not.

But do you remember the time the gate closed just before you arrived? And every breathless, stressed-out detail of the doomed effort to get there on time?

We’re conditioned to remember bad beats in poker rather than the thousands of times the odds played out. Arguments with spouses instead of the peaceful evenings watching TV together.

And massive, 10x crypto trades that somehow compensated for all the times we missed the top...

But those trades aren’t so easy to find these days. Think about all those insider deals, private rounds, secret Telegram groups... Let’s face it, information asymmetry in the market is too powerful for most of us to keep up.

So what’s left for the ambitious crypto trader who doesn’t get those whispers in the ear? Is our entire industry destined to become another version of Wall Street, where the odds are stacked in favor of the hedge funds?

Are we just plankton, whose only purpose in life is to be sucked up by whales?

At Cointelegraph, we say no.

We have been strong and dedicated advocates for the retail investors and traders of the crypto industry for almost a decade. We believe YOU are what drives this market.

And we believe YOU deserve a level playing field.

For the past year, we’ve been developing a market intelligence product for real people.

We know you can’t sit in front of a wall of monitors gazing at charts from dawn until dusk. You can’t be tied to Twitter 24 hours a day. And even if you could — how do you make sense of the overwhelming amount of data that’s generated every minute in crypto?

So we’ve been building a solution. An easy-to-use, easy-to-read resource that can help you make informed decisions as you research crypto trading and investing.

Parts of this market intelligence tool have already been deployed in the wild — in fact, some of the most successful hedge funds in crypto use the data we’ve compiled in Cointelegraph Markets Pro.

Top investors are paying tens of thousands of dollars for access to mere fragments of what we’re digesting and interpreting. That’s not hyperbole, that’s a fact.

Even the world’s largest crypto media companies use the technology behind it to report the news. (Yes, both of us!)

But nobody — no hedge fund billionaire, no quant analyst, not Michael Saylor, not Paul Tudor-Jones, or CZ... literally nobody — has ever had access to the entire pipeline of data we’ve put together.

It’s time to give everyone else a chance.

Cointelegraph Markets Pro is for us, all of us. It’s for the people who created this industry, who fuel it, who participate in its growth and excitement.

It’s for the people who wanted to disrupt the system. The people who believe in financial equality. The people who’ve built a trillion-dollar industry IN SPITE of the hedge funds and powerful special interests.

Maybe it’s a cliché by now, but it’s true: our industry was supposed to democratize finance. But here we are, watching billionaires get richer.

And the truth is, we can do better — with the right information, we can do MUCH better.

Well, we all know what moves crypto markets.

We all know that when Elon says jump, DOGE says "How high?"

We all know it.

But we can’t access that information in real-time. And worse still, we can’t gauge the slow groundswell as a crypto asset’s sentiment shifts into positive gear... and builds... and builds...until the pressure pushes that asset’s price into explosive gains.

Scratch that. We couldn’t.

What is Cointelegraph Markets Pro?

At the very core of our dashboard is VORTECS™, a real-time score that assesses current market conditions from a variety of perspectives including sentiment, market volume, tweet volume, price over time and so on… and compares them to occasions those conditions have been seen in the past.

If our proprietary algorithms see a pattern, they look to see if there has been a consistent price movement in the 24-96 hours following that pattern.

The VORTECS™ algorithm is working day and night, 365 days a year, across over 130 crypto assets, to find these patterns — and learning as it goes.

Because here’s the stunning truth.

History repeats itself more than we like to think. We’re just conditioned to remember the outliers.

And it’s a human frailty that our algorithms don’t share.

...And those conditions have historically led to a market movement...

You can be the first to know.

What you see here is a quick recap of some live testing we’ve done with the VORTECS™ Score. (*More details on these tests are at the bottom of this page.)

These tests covered January 5 to February 8, 2021, and we ran them for every score that crossed these thresholds during that time.

Even accounting for Bitcoin’s rise, the ‘market dominance’ of these assets increased too...

As you can see in the ‘dominance’ columns, when an asset crossed a VORTECS™ threshold of 70, 80, or 90 we were able to pinpoint its rise relative to the entire crypto market as well.

This doesn’t mean that VORTECS™ can predict the future…!

It simply means that historically similar conditions can be a useful measure of how healthy or unhealthy a crypto asset’s current market outlook is. And we’ll explain more about how that works once you accept your invitation.

In other words - the news that moves markets.

And through Cointelegraph Markets Pro’s community Discord server, you can get these headlines AS THEY HAPPEN, powered by the same technology that powers Cointelegraph itself!

At Cointelegraph we’ve brought you breaking news for eight years.

And let’s not be fake-humble here. We’ve helped millions of readers understand crypto better… which has helped elevate the profile of our entire industry.

But until now, there’s always been a time lag between the news we source, and the time it takes to write it and deliver it to you.

And nobody will get this market intelligence faster than you. Nobody.

Some of our competitors focus on institutions. Some focus on bringing crypto to Wall Street.

But if you really want to know who we’re here for... you might remember who was Number One on our Top 100 Notable People in Blockchain this year.

Sincerely,
All of us...
The team at Cointelegraph

We believe we’ve built something of value for crypto market participants. And we think you’ll see that instantly.

We want you to get every opportunity to see how Cointelegraph Markets Pro can be an invaluable aid in creating your own trading strategies.

And we’re willing to put our money where our data is.

So when you purchase your subscription today, we’ll give you 14 days to decide if you want to keep your access to the platform, the VORTECS™ Score, the NewsQuakes™ and the Discord community...

And if not? We’ll make it super easy for you to simply cancel your subscription through the Settings menu.

Get your NO RISK subscription started today with our 14 Day Money-Back Guarantee.

Simply email marketspro@cointelegraph.com to cancel within 14 days and you will receive a full refund, no questions asked.

We show the average returns after scores cross certain thresholds (70, 80, and 90). Note that scores can stay above these thresholds for a while; here, we are starting the “timer” when it initially crosses above these scores.

Day Change and Week Change are simply the % change in price of an asset from the time the asset’s score first crossed a threshold until 24 and 168 hours later respectively.

Looking at changes in market cap dominance gives a measure of how much the price of an asset changes, while also correcting for overall market trends.

Cointelegraph is a publisher of financial information, not an investment adviser. We do not provide personalized or individualized investment advice. As a condition of using Markets Pro you acknowledge and agree that no Content published or otherwise provided as part of any Service constitutes a personalized recommendation or advice regarding the suitability of, or advisability of investing in, purchasing or selling any particular investment, security, portfolio, commodity, transaction or investment strategy. Cryptocurrencies are volatile investments and carry significant risk. Consult your financial advisor before making financial decisions. Full terms and conditions.